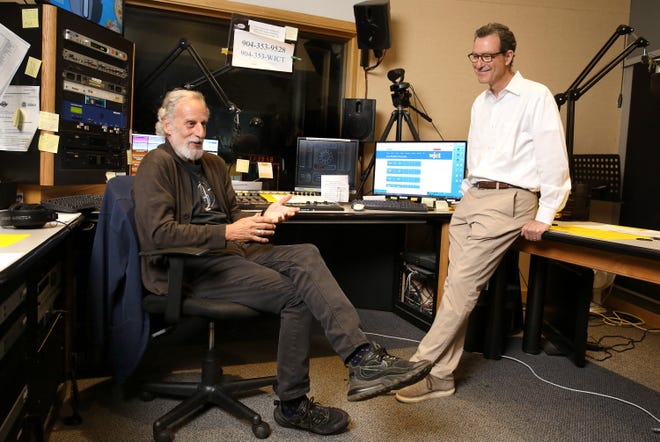 On April 20, 1971, National Public Radio went on the air with coverage of the Senate hearings on the Vietnam War, broadcast on the 90 stations that had pioneered public radio.

Landon Walker came to Stereo 90 in early 1974, when most of its programming was devoted to classical music.

As he recalled in some written notes he prepared for the station’s 50th anniversary, “We called it Stereo 90 in the pre-digital days when 90 was pretty close and Stereo was still new enough to to boast.”

Walker, who now lives outside of Asheville, North Carolina, said over the phone that he wasn’t too impressed when he first heard WJCT: it sounded boring. But there was some hope.

During those early years, he said, some at the station felt it was neglected by management who were more interested in the city’s public television station – with which they shared a studio and letters. of appeal, and which had already been operational for more than a decade.

But it allowed a certain freedom, which those on the radio side were eager to explore.

“I think they had big ambitions early on to make it experimental and adventurous,” Walker said. “They had called for volunteers in the community: Would you like to have a radio show? Let us know what your idea is.”

Walker had radio experience from Florida State University, a classical music background, and a desire to try something new. The classic seemed to be covered, however, so he started a blues show, despite knowing next to nothing about the blues.

He then launched a renaissance music show, a bluegrass show, a jazz show and a world music show. They fit in alongside the station’s classic programming which included live broadcasts of the Jacksonville Symphony Orchestra and concerts from orchestras across the country delivered on tape reels.

In 1982, he and Steve Grad, a Russian scholar and improv actor, launched The Metro, a 16-hour showcase for adventurous music, performance art, poetry, interviews and wacky comedy sketches, announced every day with the whistle of a train.

It became Walker’s flagship show (Grad left after about a year) and aired regularly for 11 years. It was like nothing else on Jacksonville radio.

“I was just making it up,” he said. “But it was just like kind of a highlight for us. We were having so much fun, more than the law should allow.”

Walker left the station in 1993 after what was reported at the time to be a dispute with station management. Fans of the show weren’t happy: They formed a group called Members for the Metro, who protested, marched and wrote letters, to no avail.

This was not the only protest involving the station. In 1999, after a sudden change in programming replaced daytime classical music with all news and talk, protesters showed up with signs. “Vote for the tickets”. “Music does not speak.” “Beethoven returns.”

It is clear that listeners take their public radio seriously.

Consider Walker’s experience with The Metro. At first he had no idea who was listening. But he soon discovered it.

“You could almost feel it on the air,” he said. “I was busy in the community and heard about what I was doing from just about everyone. I felt like I was right in the center of something pretty good.”

He thought about it for a second. That’s how it’s always been with radio.

Half a century of antenna, what’s next

Over the past week, the radio station has celebrated its on-air anniversary with recorded messages, stories and a Friday pledge campaign.

Those who run it now, however, are eager to talk about where it goes from here, 50+.

“People have given up on radio forever, since television came along. But radio is the most widely used medium in the United States,” said David McGowan, president and CEO for about four years. And over 90% of Americans listen to the radio.”

The station – well past its 90 stereo days and now known as WJCT News 89.9 – has changed, like other public radio stations.

Since 2020, it’s all been news and talk, a change that McGowan says has boosted the ratings. It’s largely nationally syndicated shows, anchored by homegrown First Coast Connect with host Melissa Ross.

Music is still played throughout the day, but is found on the station’s three digital channels which can be heard online or by listeners with an HD Radio receiver.

Mark Woods: Turning the clocks back to when everything was ‘hotsy totsy’

Station manager David Luckin has been with WJCT since 2000, starting as a producer and then venturing into his own eclectic music shows. First came NightFlight, a weekly one-hour program of space relaxation music. This led to Electro Lounge, five nights a week, featuring a huge range of styles and artists.

Electro Lounge eventually migrated to the station’s digital channels, which also include classic and old-school shows 24 hours a day.

But change is constant. And last week, the station launched a channel called The Independent, in which Electro Lounge shares the day with a show dedicated to new music and Jacksonville-based music, developed with the arts and culture editor recently hired, Matt Shaw.

Luckin calls the Independent an important showcase for the large community of local artists and a landing point for anyone looking for something they may not have heard before.