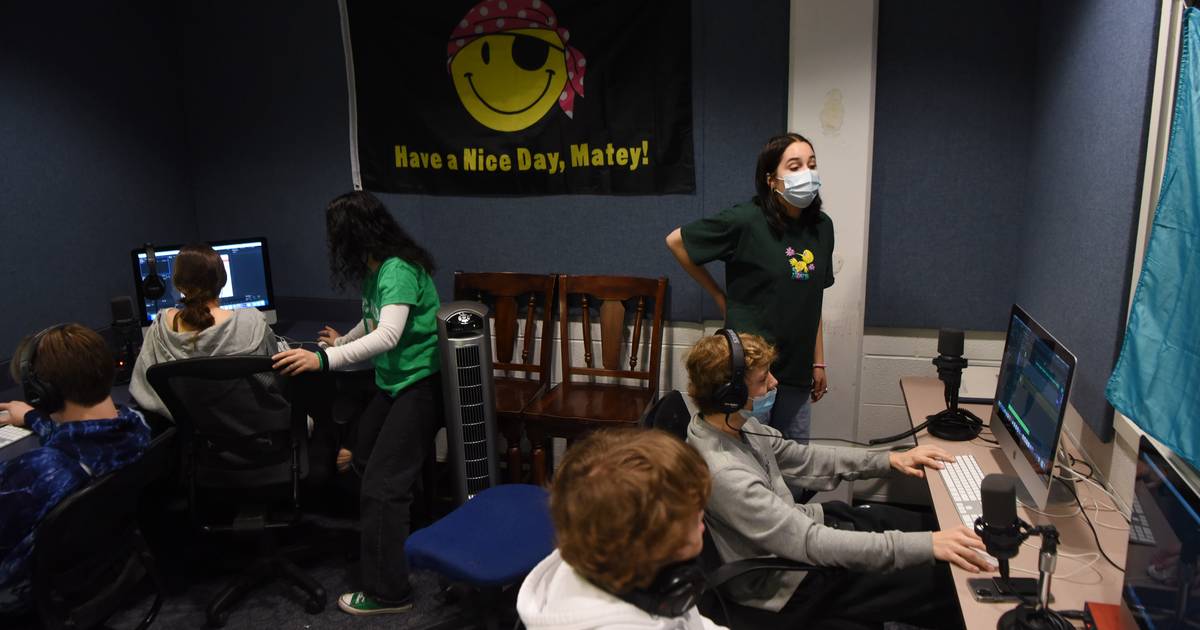 “And someone said, ‘Why not let the kids do it? “,” recalls Dr Dan Oswald, professor of fine arts and broadcasting at Glenbrook South.

This is now the 40th year that students from Glenbrook South and Glenbrook North have been broadcasting on WGBK 88.5 FM. These call letters changed in 1997, a year after Glenbrook High School District 225 purchased the station from Midwestern Academy, 74 Park Drive, Glenview.

Oswald, Glenbrook South’s educational advisor for WGBK FM and a graduate of the school in 1992, studied under his predecessor at Del Kennedy station. In 2003, when she was considering retirement, Kennedy asked Oswald if he would direct the radio program and the program.

A listener since 1986 when his parents came home with a Sony turntable receiver, “Doc” Oswald took over as a school radio show adviser in 2004.

“I thought it meant so much to me as a kid, I wish it would continue,” he said. “For me, the station has been a lifelong love affair.”

Oswald said WGBK, whose origins in the late 1970s as a club was a disc jockey playing music in the Glenbrook South cafeteria, is one of less than 200 frequency radio stations owned to high schools across the country.

On Mondays, Wednesdays, every other Friday and Saturday, Glenbrook South students monitor the airwaves and broadcast on gbsradio.com – ‘The Mouth of Glenbrook South’. Tuesday, Thursday, alternating Fridays and Sundays, WGBK 88.5 FM’s transmitter is switched to the Glenbrook North team who run gbkbroadcasting.com.

The station is on the air 24 hours a day, with student programming typically between 3:30 p.m. and 9 p.m. Monday through Friday, said Justin Weiner, Oswald’s counterpart at Glenbrook South.

A 2005 Glenbrook North graduate, Weiner is a broadcast and physical education teacher who returned to his alma mater after working in sports at WGN Radio as a producer who also had his own prep sports show.

“The best way to run a class is to let the students run it,” Weiner said.

As part of each school’s wider broadcast program – Todd Rubin runs TV and film at Glenbrook North, Julie Benca at Glenbrook South – radio students do everything in front of and behind the microphone.

The music is this expansive “alternative” genre, although it spans from the 1980s and 1990s like The Cure, Peter Gabriel and Pixies to the latest contemporary bands like El Ten Eleven.

Freshmen don’t have to wait two years to get on-air experience. They can sign up for a regular one-hour time slot.

“The intent of everything you do is to be delivered to our community, whether written or recorded,” Oswald said.

Great Community Service will be the 27th Glenbrook North Radiothon on April 22. It will feature a broadcast of the Assembly of Spartan Pride during its 10 hours of broadcast and live streaming.

In partnership with the Lou Malnati Cancer Research Foundation, the goal is to raise $10,000 for cancer research. Raffle ticket sales, $1 each, begin April 1 and include a song request with a chance to win prizes. Sponsorships of $100 per hour are also available.

Weiner said students and staff typically collect these raffle tickets, but his goal is to extend the reach beyond the school.

Weiner believes that aside from the Xs and O’s of content creation, the radio show helps young people “develop their voice” literally and figuratively.

“It can be a little nerve-wracking, and I think overcoming their adversity helps them later in life.”

Oswald said that with the training provided by WGBK, Glenbrook South radio students could go to a commercial station and, within weeks, be operating “like pros”.

“When you look at equipment and stuff like that, it’s stuff that I’ve used across the board, whether it’s audio editing software or soundboards,” Aki said, studying broadcasting and digital journalism at Syracuse. He started in October 2019 on ESPN, his first interview after graduating from college. He currently co-hosts a Sunday college basketball program with a golf show coming in April.

The student camaraderie was one of his favorite parts of the WGBK experience.

“It’s a great culture where everyone cares about each other,” Aki said. “It doesn’t matter if I was friends with people outside the class. Once you’re inside the walls of the radio station, you pay attention to those people.”

Aki credited Oswald, who in 2011 won the Distinguished Teacher Award from the Glenbrook South Parents Association.

“What he did to bring everyone together, I don’t think gets talked about enough,” Aki said. “I formed and maintained lifelong relationships with this class, and to be honest, if I didn’t take this class, there are people there who would probably never talk to me or interact with me. It’s a cool little family there, for sure.”

Oswald doesn’t see this program going anywhere. In fact, he is confident about the future of radio and what this medium will mean in the future.

“Being a responsible content creator will be key to being a successful adult in the 21st century,” he said.

“Having a station is one thing, using it as a club or an after-school program. But having a station that is a tool for an actual full program where kids can learn about broadcasting from scratch, is very unique. “, Oswald said.