With a new award, radio station KVPI celebrates decades of promoting Cajun French on the air 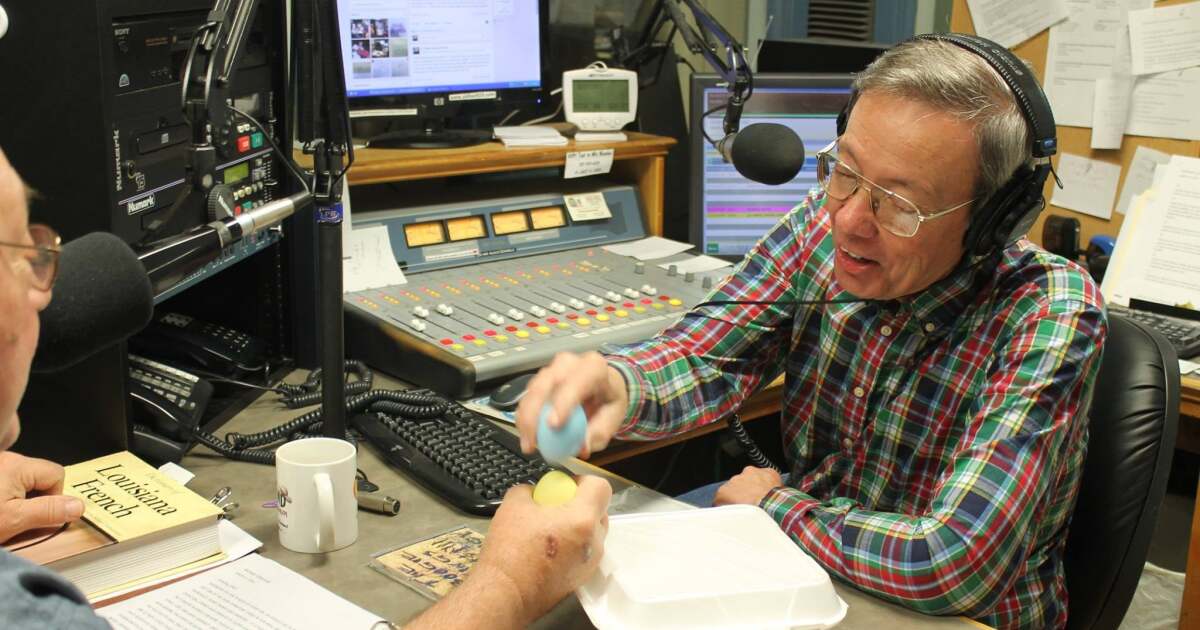 The price was due in large part to their Cajun French programming, as the station not only continues to provide Cajun French newscasts and music, but also has a long history of bilingual code-switching hosts. ‘antenna.

This interview has been lightly edited for length and clarity

Alana Schreiber: If I understand correctly, the “Uniquely Louisiana” award went to Le Tasse De Café, or The Coffee Cup, for its bilingual programming. Tell me a bit about this specific show and its history.

Mark Layne: The story is quite interesting. In the 1960s, probably mid-1960s, one of our business sponsors, Mr. Floyd Soileau, was still a record store owner. In fact, Floyd is a whole different story. Floyd actually started out as a part-time DJ in high school as a French announcer. Floyd suggested to our manager at the time, Jim Soileau, to initiate a phone call, but make it bilingual so we could support our Cajun culture. So it started very humbly in the mid-sixties, 15 minutes once a week. And now, over the years, it has grown. And right now, we’re on one hour a day, Monday through Friday. And we have a waiting list of sponsors and we have calls with the help of internet and streaming.

We get calls from all over the country. We actually got calls from people in France, Australia and even China once. It’s incredible. This is our most listened to show of the week.

AS: Of course, Jim’s Soileau was constantly switching back and forth between French and English on the air with the callers. I even have clips of him doing that years ago…I wonder why you think it’s so important to have a show that’s not just in French, that’s not just in English, but as Jim once told me, Fringlish.

ML: Fringlish, exactly. The term we use here is “Frang-lay”, which is like a way of saying Fringlish. But basically, I think it’s a way to attract people who grew up listening to their grandparents speak French, but who don’t know how to speak French themselves. Now they hear words in English, but hear a few tasty bits of French to get them in and hopefully keep them. And I think it worked.

AS: Tell me a bit about the callers on the show, like you said, they call from all over the place, but generally what do they want to talk about?

ML: We’ve talked about everything since Mardi Gras, food is probably the biggest or most popular topic of conversation, the recipes, the foods, the Cajuns loved to cook here. And Cajun customs, somewhat old businesses that were in our area. But I mean, we talked about a lot of different things.

AS: Even though Cajun French is highly promoted on the airwaves today, it wasn’t always that way. Can you tell me a bit about the history of the first efforts to stop speaking French in Louisiana, and then later of the revitalization movement?

ML: From what I remember, going to school and hearing about it, I think it was in the twenties, a law in the state legislature prohibited speaking French. And in fact, the students were punished if they spoke French and had to write lines and so on. So even though they heard it constantly at home, at school, they could only speak in English. But it was through the efforts of groups such as Codafil in the sixties and other groups that Cajun and French became popular and cool again.

And that’s when efforts began to bring teachers from France and Canada to come back to the classroom to teach our children our beautiful French language.

AS: Really restoring the bilingual roots! Well, back to Jim. He passed away a little over a year ago. Can you tell me a bit more about the legacy he leaves behind and everything he brought to the station throughout his very long career?

ML: For me, he’s an icon and I think a lot of people respect him. He was a newspaper editor, but like his passion, his love was broadcasting. He’s a farmer’s son and he’s always been good at talking. He had a fantastic voice and the original first director of KVPI heard him speak at a Rotary meeting. Jim was still in high school and had won the Future Farmers of America speech contest. He was therefore allowed to go and give his speech in front of the Rotarians. The station’s general manager overheard Jim and invited him to come up. And Jim could already speak French, so it was one of his very first duties as a young announcer to speak French. And he was with the radio station the rest of his life.

AS: It’s so amazing. Even though we no longer have the irreplaceable Jim, The Cup Of Coffee still continues. So what does the show look like today? How has it grown and changed over the years?

ML: We extended it to a full hour and people always ask us to go for an hour and a half or two hours because they like it so much. We have Charlie Manual who is basically our French announcer, who does all of our news in French. And he’s a co-host for all of La Tasse De Café, and myself, along with Mike Peril. We co-host with him every day of the week and it’s great fun.

AS: It sounds really fun. Well Mark, you’ve been in the radio business for a very long time. In your opinion, what is the role of radio and broadcasting in efforts to revitalize and energize the Francophonie in Louisiana? Why is it so important to keep Cajun French on the air?

And I became an announcer at Fred’s Lounge. We do a weekly show from this little bar where people from all over the world come in and they hear a live Cajun band. We do live radio there. And that’s when I started to love French, to love my heritage and my culture.

And then, with the help of Jim Soileau and others, they said, “Keep practicing, Mark, keep practicing!” And I did, and I’m proud that I was able to get a love for our culture. Not only the music – the music is great and our food is great – but our language is so special. And I don’t want to lose it.

Finally, Mark, I wonder if you can tell me a bit about this award, the title is “Uniquely Louisiana”. What do you think it means to be uniquely Louisiana? And how does The Cup Of Coffee really capture that feeling?

Unfortunately, there aren’t too many radio stations like us that still do what we do. I think we are the only radio station in the state that still broadcasts news in French. We make the local news. We even do obituaries all in French. We do it twice on our Am station, once on the FM station. We have La Tasse De Café, we have our French word of the day, and we even have a French exchange shop. So we just believe in our French language. And we’re just proud that Louisiana broadcasters think we matter. That we try to keep our culture and heritage alive.