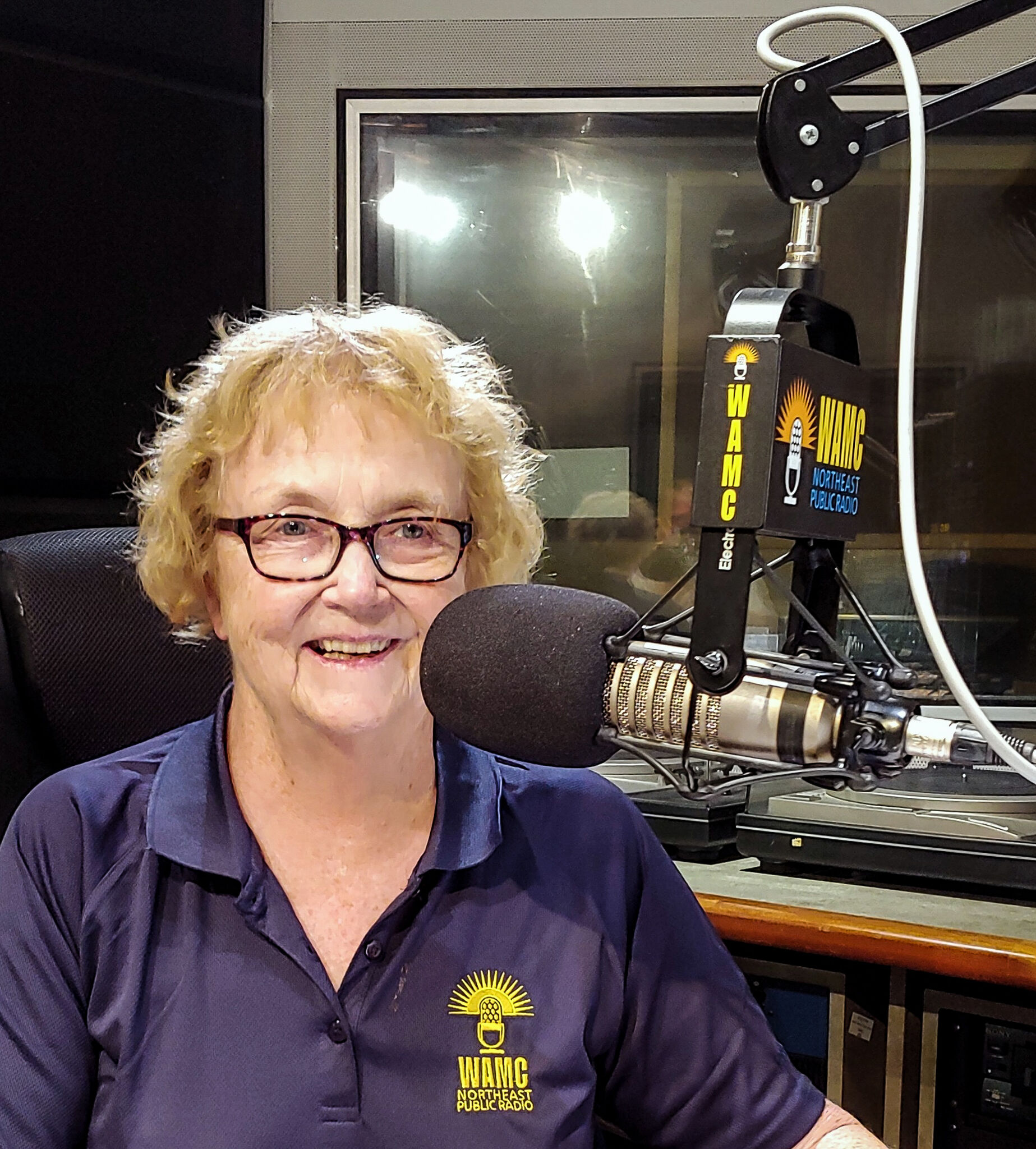 A few years after moving to Albany for her husband’s medical residency, Wanda Fischer was the mother of two toddlers, a folk musician who had hosted a radio show in her native Massachusetts and a volunteer at WAMC Northeast Public Radio. David Galletly, then an Albany-based WAMC executive, asked to hear recordings of his old show.

The result was “The Hudson River Sampler”, which debuted on WAMC on September 18, 1982. Fischer was the host, and she remains so today. Featuring folk musicians who have appeared on the weekly show as guests and/or whose music has been featured frequently on “Hudson River Sampler” for 40 years of Saturday Nights, Fischer will present a live show and concert – Saturdays, of course, at WAMC’s The Linda Auditorium. The October 8 broadcast will also be available for live streaming and future downloads.

The Fischer family hadn’t necessarily planned to stay in the capital region after her husband finished his residency, figuring, “A doctor can find a job anywhere,” Fischer said. But, after the show launched and the young family began to love the area, the same logic applied, and her husband got a job here, becoming a local doctor with a family practice.

Now the kids are in their 40s, there are grandkids, the doctor is retired, as is Fischer from his daytime PR career, but from 8 to 10 p.m. on Saturday nights, listeners know where the find: on WAMC’s 29 frequencies in Connecticut, Massachusetts, New York and Pennsylvania, and the station’s website.

On line: The radio show and concert will be broadcast live from 8 p.m. to 10 p.m. on October 8 and available for streaming afterwards on wamc.org.

Fischer pre-records about six shows a year to cover holidays and other matters, as well as during parts of the summer when “The Hudson River Sampler” streams online but is overtaken by Tangelwood’s Boston Symphony live shows. in Lenox, Mass. Otherwise, she’s live, playing about two dozen folk songs for two hours, most of them driven by listener requests.

“I’ve had calls from Bermuda (and) Canada; a guy listening all the time from Ohio; and I hear from a guy staying up all night in Ireland listening,” said Fisher. “It’s really hard to know where everyone is now that it’s online.”

As for the ratings, “I have no idea. I don’t even know how I would find out,” said Alan Chartock, president and CEO of WAMC for decades. Chartock is a performing folk musician himself, playing banjo with The Berkshire Ramblers, but he was not involved in the creation of “The Hudson River Sampler”. He said, “Has it only been 40 years? I would have said 50.”

The enduring appeal, according to online fan forums and musicians who have appeared on “HRS,” is Fischer’s encyclopedic knowledge and abundant love of folk music.

Plus, “She’s doing her homework,” said Reggie Harris, one of the musicians who will be performing on the anniversary show. “With some DJs, you can tell they don’t really know the musician or what your songs are, but Wanda is prepared.” The two met shortly after Harris moved to the capital region in 1988 and they were both among the artists booked for a folk concert.

“I went up to her and said, ‘Hi, you don’t know me, but I want to be on your show,'” Harris said. “She’s been a really big supporter and ultimately a friend. … I got to sing on one of her albums. It’s been a long and sweet relationship.”

Streaming radio brought together larger communities of listeners and DJs. Among Fischer’s friends and fans is Detroit-area folk musician and radio host and podcaster Matt Watroba, who along with Fischer was inducted into the 2019 Folk DJ Hall of Fame at the Folk Alliance International conference. to Montreal. The two have been friends for around 20 years, meeting at Folk Alliance conferences, listening and inviting to each other and connecting when Watroba is in the capital region performing at the annual Old Songs festival or Fischer is in Michigan.

Fischer’s skills as a radio host impress Watroba as a DJ.

“It’s one thing to be a fan of music,” he said. “It’s another thing to be able to curate a playlist the way she does. It’s like her own kind of performance, especially when you’re like her, so open to (listener) requests and following the conversation where she go.”

In the early years of “The Hudson River Sampler”, Fischer volunteered his time. Eventually, she says, “I asked to be paid, because I had to hire a babysitter to go to the train station to do the show.” The pay remains minimal – ‘It covers the gas,’ Fischer said, his degree of joking unclear, adding: ‘It won’t improve my retirement’ – but that was never the reason for it .

“I love the listeners. I think they’re just amazing,” she said.

In addition to the radio show, Fischer writes more. She has published a novel, “Empty Seats,” about another longtime passion, baseball, and two short stories, all available on Amazon, and is editing a second novel.

“I don’t know how I used to find time for my day job,” she said.

There are no plans to end “The Hudson River Sampler”.

“As long as I’m here, she can stay as long as she wants. Definitely,” Chartock said.

Fischer will be 74 in November and she has two artificial knees.

“I still play tennis!” she reports. “As long as I have my mobility, I will continue to do (the show). Even during the pandemic, I was coming into the studio to do it. People were saying that it mattered to them: ‘It’s great to know you’ . ‘are there.’ Knowing where I will be on Saturday night is comforting to me and to the listeners.”