These college kids have a warning about teens and social media 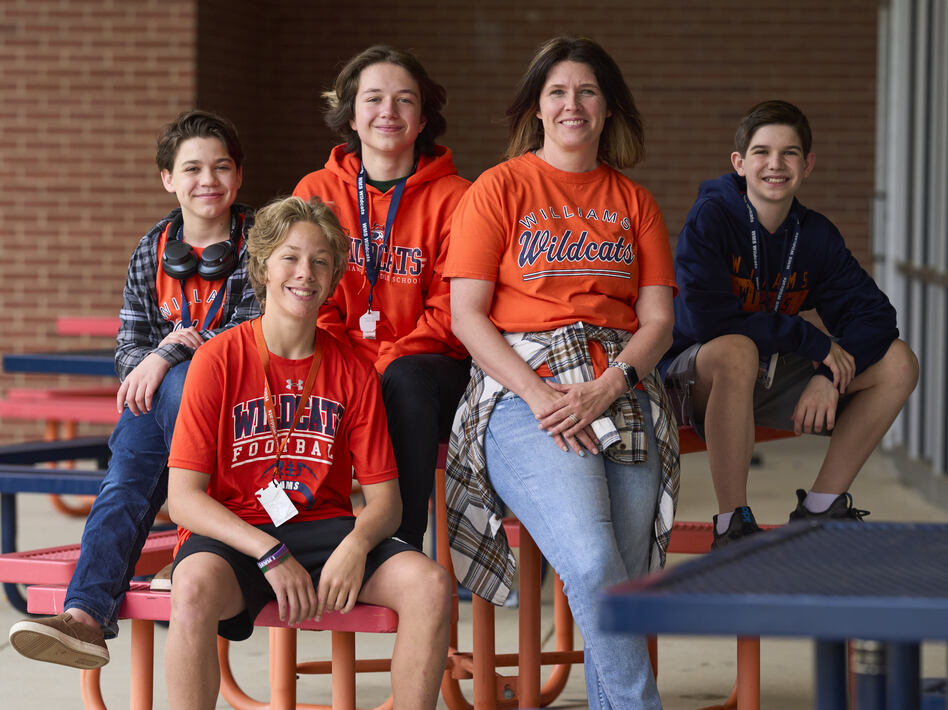 The town of Rockwall, Texas has a few claim to fame: Bonafide Betties Pie Company, where “thick pies save lives”; the Giant Church of Lakepointe; and Lake Ray Hubbard, which is lovely until the humid Texas heat makes a walk on the shore feel like walking through hot butter.

Add to that list now: Rockwall is home to the college winners of NPR’s fourth annual Student Podcast Challenge.

Their entry, The Worlds We Create, is a fun and slyly thoughtful exploration of what it means that so many teenagers today are “talking digitally,” instead of face-to-face. It was one of two winning entries (the high school winner is here) chosen by our judges from over 2,000 student podcasts from across the country.

The team behind the pod

Rockwall hugs the eastern shore of the lake and takes its name from a wall-like thread of sandstone that runs beneath the town. “Every street name sounds the same: Lakeshore, Club Lake, Lakeview, Lakeside, etc.,” says podcast narrator Harrison McDonald, an 8th grader. “If it looks like our town is boring, that’s because it is. But let’s zoom in on the center of one of those neighborhoods, on Williams Middle School.”

It was there that Harrison, fellow 8th grader Blake Turley and 7th graders Kit Atteberry and Wesley Helmer made the podcast, as part of librarian Misti Knight’s broadcast class. Knight began teaching Harrison and Blake last year, when they were making videos for the school’s morning announcements. “But then I realized how much [the boys] were, and so I would say this year I’m honestly more of their manager,” she laughs.

This means that often Mrs. Knight just gives the boys the roughest ideas and encourages them to get creative. That’s why, when Harrison came to her with an idea for NPR’s Student Podcast Challenge, she said, “Why not?”

Harrison’s interest in the contest came as no surprise. He wears large headphones around his neck every day, like a uniform, and says he was raised on public radio. “[My family] have a system. On long car journeys, we listen This American Life. On shorter trips, we listen Wait, wait, don’t tell me anything.”

Kit also brought a love of podcasting to the effort: “My dad made me listen to podcasts, and we would just listen to them in the car and listen to them at home. You know, he was never really… in music. He was mostly into podcasts,” Kit says, particularly moth.

For their entry, Harrison, Kit and the team wanted to explore how students at Williams Middle School, and likely every other middle school and high school in the country, interact on social media. Specifically, when they go to a platform like TikTok or Instagram and create anonymous accounts to share things about school and their classmates.

“People feel anonymous, so they feel like they can do whatever they want”

For example: An account dedicated to photos of students considered “hot”.

One account was entirely dedicated to photos of students sleeping in class. On some accounts, the students are in on the joke, but often they aren’t, Harrison says.

“Thanks to the internet…people feel anonymous, so they feel like they can do whatever they want and get likes without any punishment.”

The boys found at least 81 such accounts in Williams alone. Then they had a bold idea.

pretend until you make it

“After seeing all these social media pages, we decided it would be fun to create our own profile and post some fake gossip to see the impact it has and how it spreads through college,” explain they in the podcast.

Fake gossip is an understatement.

“We knocked on the door of our school’s police officer and asked him if he would pretend to arrest one of our AV club members for the camera. Surprisingly, he actually agreed,” Harrison said.

It was the first video to be uploaded to their new gossip account. “We didn’t think it would lead to anything, but less than 15 minutes later we heard people start talking about it.”

Next: The boys staged a fight in the group room, hoping that a shaky camera and sound effects added in post-production would convince their classmates that it was bigger and very real.

“Some of us had kids come up to us every day to tell us how completely destroyed we were in that fight or how they didn’t know we were in the group. We were having fun with that now,” Harrison said on the podcast. “It didn’t take long for our fake account to start getting more followers than any other gossip account we could find.”

“Our generation prefers to speak digitally”

As part of a social experiment, these four college kids went from silent social media observers to school master muckrakers — even though everything they posted was totally untrue. In this way, the podcast functions as a warning about the importance of media literacy — in a time when Americans half a century their senior are being sucked into social media every day.

But the podcast isn’t just a scolding about fake news. It’s also how, for kids their age, it’s communication.

“We don’t pass notes, we text with our phones hidden under our desks,” says Harrison. “We don’t tell people about the incidents that happened in class, we post them on TikTok. Our generation prefers to talk to each other digitally from a distance, [rather] than communicating with each other in the real world.”

The boys named their podcast, The worlds we create.

Ms Knight, a seasoned teacher, says she has seen these changes in students over the years.

“I just think there’s a lot less talking and a lot more, you know, swiping on their phone instead of saying, ‘Hey, guess what I saw today?’ “

Knight even saw it in his own family. “I was talking to my husband about, ‘Oh, have you seen our oldest daughter?’ She lives in California. ‘She did this or whatever.’ And he was like, ‘How do you know that?’ “

His answer: “Because I follow his social networks and the social networks of his friends.” Because if you don’t, she’s probably not going to pick up the phone and call us to tell us.”

Is it inherently bad? Knight says, no, not necessarily. She can see more of what her daughters and friends are up to, from afar.

Boys’ opinions are just as complicated. All this “digital speaking” can be a real “curse” for teens, they say, especially when it hurts or excludes others. But it doesn’t have to be that way.

After all, say the boys, the whole purpose of technology, from radio to telephone, from television to the Internet, has always been to help us feel less alone and more connected – helping us to create worlds – and to build communities – larger than those we were born into.