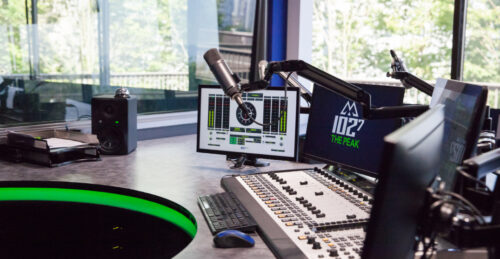 Big changes are coming to a beloved Vancouver radio station — but don’t worry, THE PEAK isn’t going to stop there.

In a statement, we’re told THE PEAK is “breaking the mold and switching to 102.7 HD2 on your HD-capable car stereo”, starting Monday, July 25.

According to program director Russell James, you can still hear the station you know and love on all the streaming platforms you’re used to.

“It’s really great to lead this team on this exciting new path where we can challenge the norm and build something really cool,” says James.

Favorite PEAK hosts are on board – you can hear “The Early Show” on weekdays, hosted by Charis and Jeremy, and catch Music Director Jason Manning in the afternoons.

Host Charis and Jeremy at THE PEAK Studios

“Music has always been what defines us and that doesn’t change. In fact, moving away from traditional FM means we have more freedom with our playlist and can get away with things other people can’t!”

The station says it will continue to bring listeners closer to music with indie music features and exclusive experiences like the live PEAK Lounge.

The station is available online, on THE PEAK app, on your smart speaker – and, of course, you can listen on your HD-capable car stereo at 102.7 HD.

The station also teases that more changes will be announced on Monday. Stay tuned!

Hello PEAK friends! It’s true, something new is coming to 102.7, but don’t worry, THE PEAK isn’t going away! We’re still streaming on https://t.co/d2NBNfJnJa, on THE PEAK app, your favorite smart speaker, and now on your HD-enabled car stereo at 102.7 HD2! https://t.co/Ht9S5qfKpd pic.twitter.com/1k0vUcLrNo