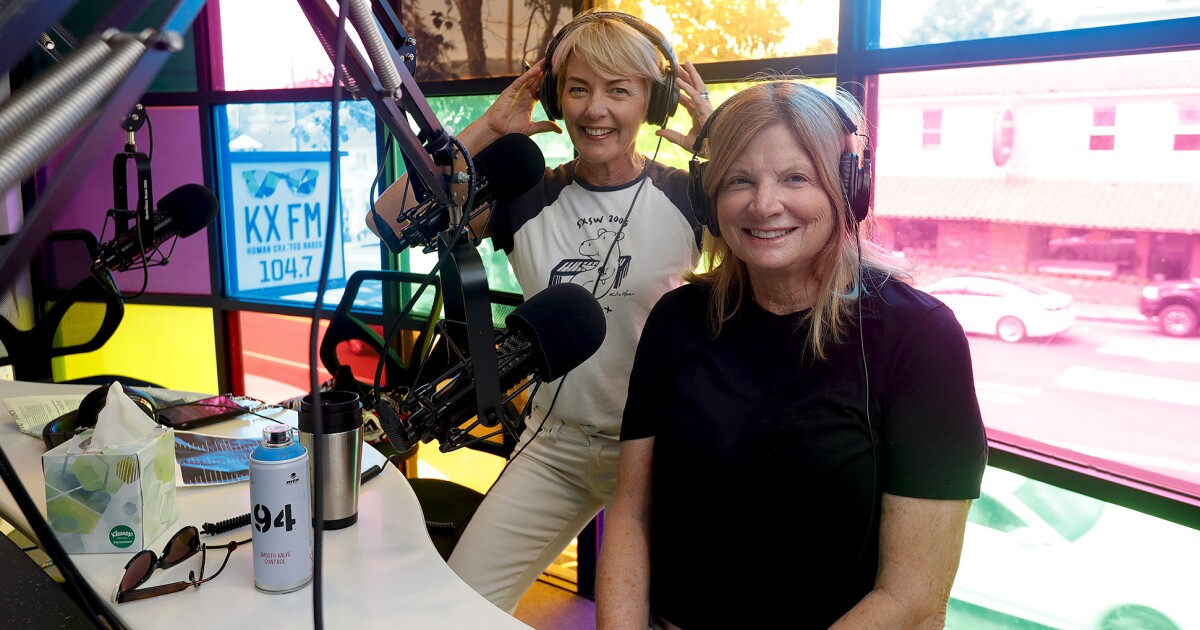 “You might not recognize my voice because I’m not Ed,” Knudsen told those expecting to tune in to 104.7 FM for Mornings with Ed, hosted by Ed Steinfeld.

Community members are once again gracing the airwaves, as the Laguna Beach Radio Station brings back its popular fundraising event. KX Takeover is back this week with a full guest lineup airing the station’s programming between 9 a.m. and 8 p.m., Monday through Friday.

Guest hosts compete for a trophy, known as the Silver Tongue Award, which is awarded to the person who gets the most donations for the station during takeover week. Pledges are made over the phone during individual shows at (949) 715-4859, or they can be made online at kxfmradio.org/takeover-2022. Scheduled guests are available on this site.

Those who participate in KX Takeover become the DJs du jour, assembling personalized playlists to share with Laguna Beach residents and visitors.

The radio station was born in 2012 and has since become a staple in the coastal community.

“It was just a brilliant idea 10 years ago by [station founder] Tyler [Russell McCusker] to put it together to begin with,” Steinfeld said of the station’s origins. “…They did everything possible to introduce the city to the radio station. … We look forward to the next 10 years.

KX FM personalities touched some of them in ways they weren’t personally aware of. To borrow from the Beatles, Knudsen shared that it was with a little help from her friends that she got through one of the toughest times of her life.

“I have cancer and I went through treatments, and it was horrible,” Knudsen said in a phone interview Wednesday. “When all my friends and family were gone [after] taking care of myself at the end of the day and I was alone with my cat, I was turning on KX FM, and I felt so connected to the community because I was very isolated at that time.

“These hosts, I became friends with some of them, but just hearing them made me feel like I was still part of the community, and I wasn’t so alone, and that was It really, really got me through a really tough time.

In an attempt to show his passion for the radio station, Knudsen curated a playlist of songs on the radio, with some songs that were released in 2012, the year the station was founded.

The coveted Silver Tongue Award is curated by Art-A-Fair exhibiting artist Heather Reichard, according to Steinfeld. Art-A-Fair will soon open its doors for the summer from July 1st to September 4th.

With weekly Thursday morning appearances on the radio station and her time on the Laguna Beach City Chats podcast, Mayor Sue Kempf is no stranger to being on the air. She decided to share a timeslot with Barbara McMurray for the second year in a row.

Kempf, who said this would be her fourth appearance in the takeover, said she appreciates how involved the radio station is in community events.

“More importantly, for me, especially as mayor now, since we’ve had two fires in two or three months…they’re on the radio and they’re communicating to residents what’s going on,” Kempf said. “Sometimes I call the radio and let Ed know, and he also gets our Nixle alerts, so he calls or he asks me about it. In case of an emergency, it’s fantastic to have a community radio. It’s a quick way to convey information to people.

Support our coverage by becoming a digital subscriber.