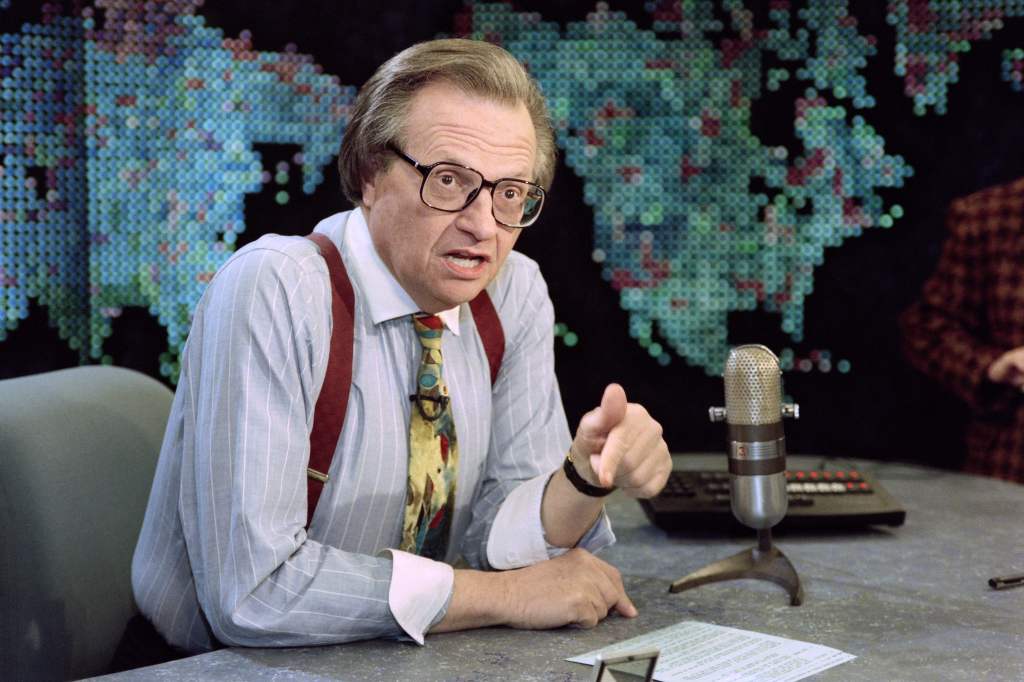 Larry King, longtime radio and television personality, died on January 23. And though most remember him for his work on the Cable News Network (CNN), it was on radio that he got his real start, a start that happened at least in part because station owners were looking for cheap content. More on that in a second.

Born Lawrence Harvey Zieger in 1933, his first radio job was at small Miami Beach station WAHR (now WMBM). Originally hired for off-air work, King began his career as a DJ, newscaster, and sportscaster in 1957. King has said in interviews that the general manager told him not to use Zieger’s name, so he took the name Larry King after seeing a newspaper ad for King’s Wholesale Liquor and eventually changed his name legally.

In 1978, The Larry King Show debuted on the Mutual Broadcasting Network, giving it a national audience from midnight to 5:30 a.m. Eastern Time, eventually moving to 11 p.m. Due to the timing, his show was not always broadcast in its entirety, nor necessarily live. Some stations would broadcast portions live, then play previous hours after the live segments. This allowed stations to run it overnight even if they weren’t in the Eastern Time Zone.

King’s show became hugely popular and eventually had over 500 affiliates, but it didn’t air on all of those stations just because of its content, at least not at first. The show’s appeal at its inception was that it was free, offered on a barter basis so that stations could trade advertising time for the opportunity to air the show. It gave stations across the country the talent and respectability of big names overnight without a huge commitment.

Over time, the show became more popular. King also began to have more influence, including over the stations that aired his show. In 1991, King announced on air that he would be moving to KMPC (now KSPN, 710 AM). King wanted the move because, while KFI (640 AM), which ran it, had a superior signal, KMPC offered to air it live from 8 p.m. rather than on tape delay from 1 a.m.

King moved to CNN in 1985, although he remained on the radio until 1994. But it’s an interesting story to me that without station owners basically looking for free programming, King might not have never been the successful national radio host that he was or CNN. star he later became. And it underscores once again the fact that good, compelling programming doesn’t have to be expensive… just creative.

It’s been a while since I last bought a car stereo. Last time it was a replacement for my wife’s car because she wanted the Bluetooth built in so she could use a cell phone in the car. This time it was for the same reason, but it was my son who needed it. And I was frankly amazed at how much I got for the price.

I wasn’t looking for a touchscreen model, just a simple unit that included what I consider essential features: Bluetooth, CD, iPhone compatibility, built-in HD radio, and the ability to add a SiriusXM tuner. Basically anything I can think of that can be used in a video short car. The model I found? A Kenwood, which costs less than $150. $139.99 plus tax to be exact.

Now I needed to get a few extras… an interface to use the car’s built-in amplifier, an interface to allow the steering wheel controls to work, and a dash that makes the radio look better than factory OEM . But the fact that the base unit had great specs and built-in HD for less than $150 was surprising. If I didn’t want CDs, I could have saved another $20. And it even works with the phone (including iPhone and Android) to play and control Spotify and Pandora, as well as play Apple Music and all the apps you might use to tune into internet radio.

For this price, if you have a reason to upgrade your car stereo, you really should consider HD radio along with the other features. You never know what you will find to listen to.

There was an old joke that basically revolved around the inability to find a real radio in the old Radio Shack chain store.

It never looked so bad – even when it closed there were radios for sale in their stores. Apparently not enough people wanting to buy one…hence the closure. But it turns out that the Radio Shack name lives on at RadioShack.com, and there you can still buy radios, including what we once called “transistor radios” for as low as $17. Just as you remember.