Radio station erupts in cheers as Kyle and Jackie O hang up on ‘misogynistic’ guests, ‘See you guys’

KIIS-FM listeners were challenged to tolerate the infuriating and misogynistic claims of guests Myron Gaines and Walter Weekes this morning.

Kyle Sandilands and Jackie ‘O’Henderson were presented with an interesting set of opinions from Gaines and Weekes, the US-based men behind Fresh and fit podcast, which asserted that men and women are not equal.

Jackie O didn’t shy away from the conversation and challenged podcasters when they claimed women in relationships shouldn’t be allowed to have Instagram accounts, but claimed men could.

The podcasters justified their reasoning by saying that women thrive on attention and will ultimately receive more attention from men when they post on Instagram.

As they continued to make their point, they used a diagram from the dating site “Ok Cupid” to demonstrate the disproportionate attention women received compared to men on dating apps.

Gaines and Weekes drew a very strange parallel between the attention women receive on Instagram and a car owned by someone.

In the shocking analogy, the duo asked Jackie what her dream car was, to which she hesitantly replied, “A range rover.”

“Let’s say you go to the dealership and buy a brand new Range Rover,” the couple continued. “You shake hands with the car dealership, sign the papers…get him off the lot…take him home.”

The painful analogy continued and the duo prompted Jackie to say how she would feel if the car dealer came back to her weeks later and asked her to put a sale sign back on the car, in addition to asking one or two people to try it.

Jackie said she understood the analogy they were trying to make and clapped back, “I own this car, but I don’t own my partner in a relationship.”

They answered bluntly, “Answer the question. How would that make you feel? to which Jackie said, “Obviously I wouldn’t be okay with that.”

Podcasters ran with Jackie’s response saying that’s “exactly how men feel” when women post sexual photos in order to “advertise themselves” to other men.

The conversation got heated and Jackie clapped back, “You don’t own us in a relationship, so we can post whatever we want.”

“Men don’t want to be with women other men have been with. Or they don’t want a girl with high mileage,” Gaines and Weekes cheered.

As the debate continued, the conversation escalated, and Kyle Sandilands cut in sharply when Gaines and Weekes argued that men could sleep with other women when they were in a closed relationship.

They said, “A man is able to have sex with other women and still love his daughter the same way, so it’s not that bad, but if your wife is here proposing options, that’s a problem.”

READ MORE: Amber Heard’s op-ed on domestic abuse ‘was meant to capitalize’ on the film

Jackie reached a whole new level of shock when the duo made the claim and wondered if they really believed women should be happy for their men to explore other options to which they said, “exactly closed off from your side and open on my side”.

Sandilands fired at the boys, telling them to “grow up” and calling their argument “ridiculous” before hanging up on them, shouting, “See you guys”.

Naturally, the whole studio erupted in joy when Sandilands hung up on the couple.

For a daily dose of 9Honey, Subscribe to our newsletter here. 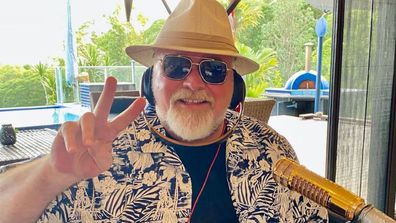