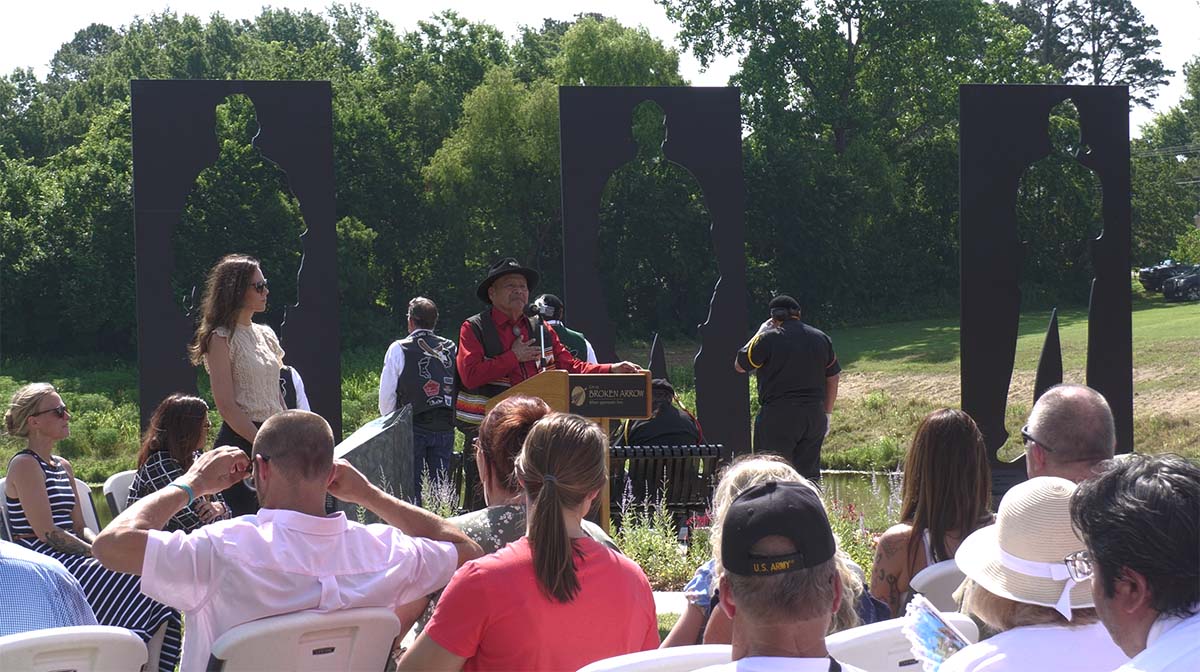 OKMULGEE, Oklahoma — The War at Home Memorial was unveiled to the public during a dedication in Broken Arrow on June 11. The first of its kind, the War at Home Memorial is a national memorial honoring veterans who committed suicide due to mental illness. . The memorial was partially funded by the Muscogee (Creek) Nation, the Mission 22 Project and the City of Broken Arrow. It featured 20 silhouette monuments, including Muscogee veteran Michael K. Coon.

The dedication opened with an overview. Broken Arrow Mayor Debra Wimpee and Mission 22 CEO Sara Johnson gave opening remarks on the significance of the memorial.

“We cannot express how honored we are to be the final home of this breathtaking memorial,” Mayor Wimpee said. “No one knows the acute cost of war better than our Gold Star families.”

The memorial was envisioned as a tangible way to recognize veterans who committed suicide. According to the RAND Corporation, a nonprofit research organization, this is an issue that still disproportionately affects veterans.

“When this memorial started as a dream of my husband Magnus in 2014, when the figures behind us were still blank plaques, he wanted to create a monument that brings the community together,” Johnson said. “To remember and honor those who have served our country and its people, especially those who have paid the ultimate price.”

An Indigenous drummer and singer performed during the presentation of the colors by various Indigenous Honor Guards, Veterans and local emergency services. Maggie Bond sang the national anthem.

Senior Chief David Hill was also in attendance, along with Second Chief Del Beaver and members of the CMN National Council.

“Time and time again, our Aboriginal people have answered the call to serve. said Chief Hill. “No race of people has sent more citizens per capita into military service than Native Americans. It’s not a statistic we brag about or seek praise for. It’s simply who we are.

After the speakers for the event concluded, the service members in the audience were recognized by an armed forces salute performed by Yakama Warriors Bugler Loren Corpuz. Traditional taps were performed to honor the dead, followed by Amazing Grace.

Memorial steward Michael D. Coon appeared on Mvskoke Radio to speak in depth about his journey to bring the memorial to the Muscogee (Creek) Nation.

“I had my doubts, at first, about being part of it, but then I thought to myself what better avenue to get the message out to our veterans so that someone can come out and tell their story of how these soldiers have gone through these tragic events in their lives,” said Michael D. Coon.

Broken Arrow was chosen as the permanent home because it provided an environment suitable for the size and logistics of the memorial.

“Why not have it at the center here in Oklahoma?” said Michael D. Coon. “It’s the perfect place for it to be here in Oklahoma because being on the Muscogee Nation reservation to have this type of national memorial placed here on our land was something honorable.”

Towards the end of the ceremonies, Michael D. Coon received a Pendleton blanket from Rex Hailey of the Seminole Nation Honor Guard. The ceremonies ended with a memorial song.

If you or someone you know is struggling with suicidal thoughts, call the National Suicide Prevention Lifeline at 1-800-273-8255. Effective July 16, the National Lifeline will be assigned a new three-digit dialing code, 988. For more information on suicide prevention, visit: https://suicidepreventionlifeline.org/

To view prior War at Home Memorial coverage, visit: https://www.mvskokemedia.com/muscogee-veteran-brings-national-memorial-home/.