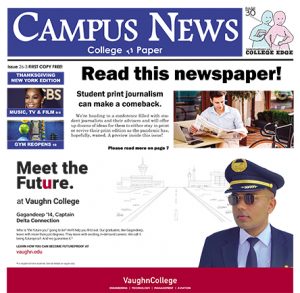 According to Gonzalez’s suspenseful radio promo, the horror series follows a couple working for a secret agency who “…investigate everything weird, from demonic choirs to other dimensions.”

Gonzalez, a graduate of Copiague High School, started his drama series on a lark – he needed to produce something for the class.

“I was stuck,” Gonzalez says, “writer’s block. And then one day the idea germinated. I took a leap of faith.

“Chris produced his first episodes for our Advanced Radio Production course last spring. The students in the class loved them, so Chris produced more. We then discussed how best to program the series and decided to make Friday night at 9 a summer series. The series is a very complicated production. From the beginning, to the writing, through the search for talent, to the recording of the final mix of the voiceovers, the music and sound effects, Chris did it all,” said Terry. Gonzalez explained that the creative process started with a rough concept followed by about two hours of studio production to finalize a script and choose sound effects.

“Once I have a plan for the program, I will choose the different voices from my friends – the other students in the radio and television program,” Gonzalez said.

Gonzalez said the first episodes of this season of his series ran from Memorial Day weekend and concluded on Labor Day weekend. A series of new stories will pick up this winter.

Listen to Suffolk Internet Radio at: www.scccir.com. You can find The macabre sessions on YouTube from here.