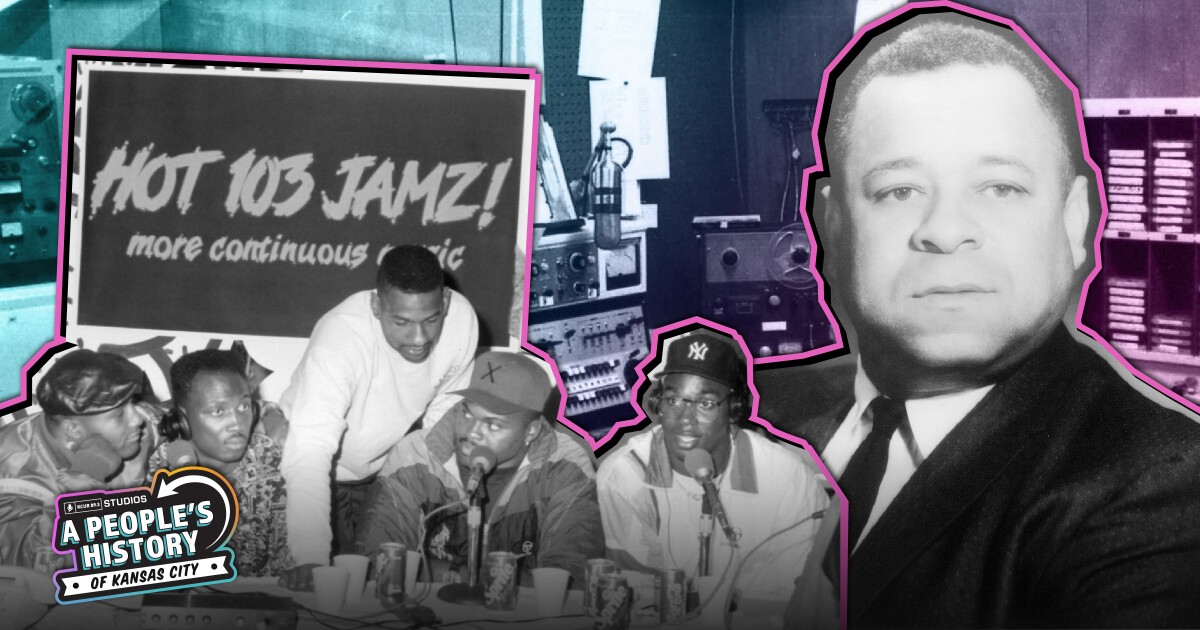 For more stories like this, subscribe to A People’s History of Kansas City on Apple Podcasts, Spotify or Stitcher.

Black broadcasters throughout US history have faced Jim Crow-era discrimination, racist practices within government agencies, and economic barriers that blocked their voices from the airwaves.

After 72 years, Carter Broadcast Group is inspiring new generations of talent at a time when black broadcast ownership represents a slice of the market and is in decline.

The company now includes an AM and FM gospel station, an R&B alumni HD station, and KPRS FM Hot 103 Jamz. For several generations in the Kansas City area, it has been a cultural touchstone.

Freddie Bell was a popular DJ on KPRS in the 1970s. But before that, as a kid growing up in Kansas City, he was a fan.

“It was the only radio station in our community that looked after the needs of our community,” says Bell. “Speaking of course of the African-American community.”

This deeper community connection is why diversity in media ownership is so important, says Jim Winston, president of the National Association of Black Owned Broadcasters.

The birth of black radio

Andrew Skip Carter was born in Georgia in 1919. From an early age, he knew he wanted to work in radio.

After a stint in the US Army, he attended the RCA Institute in New York. He learned about radio engineering, but also about racism in the industry. He was told he had no talent for advertising and was denied opportunities due to his race.

At that time, racial discrimination was legal under Jim Crow-era laws and the Federal Communications Commission racist practices perpetuated.

Even so, black programming was beginning to break through. WDIA in Memphis went on the air in 1948. It was the first station programmed entirely for blacks, but it was owned by white men.

WERD in Atlanta in 1949 became the nation’s first black-owned and operated station. Its star was black radio icon Jack Gibson – known as Jack the Rapper. He would go on to befriend Carter.

By this time, Carter was struggling to get a foot in the door. A critique he wrote about racism in the broadcast industry appeared in Broadcasting Magazine and caught the attention of Alf Landon, a former Kansas governor and unsuccessful presidential candidate, who owned a few stations radio.

Landon asked Carter to create a few hours of black programming on his Leavenworth station. Then he helped Carter get the equipment and license he needed to start his own station.

“I mean he literally took a flatbed truck to Alf Landon and brought this transmitter back, went to his garage and put this thing together,” recalls Mike Carter, who describes his grandfather as a stoic individual. and motivated.

KPRS AM began broadcasting in 1950.

Carter and his wife, Mildred Carter, shared a vision of a station that informed as well as entertained, cultivating that deeper community bond.

Mildred, who previously ran a popular jazz club, was a force in her own right within the company. She lobbied for KPRS to be simulcast as an FM station, even when FM radio was still a burgeoning format.

Mike Carter says his grandparents pushed for KPRS to be an outlet for important local conversations about justice and equality during the growing civil rights movement. Among the station’s few archival footage is a reel of tape from 1968, full of a compilation of speeches by Dr. Martin Luther King Jr. that aired shortly after his assassination.

Mike Carter says the station pushed for peace and calm when riots broke out in Kansas City, and has always been a place where messages from black leaders could be heard.

“Bruce Watkins. Leon Jordan, all of them came to the radio station because that’s where we could actually get things said,” Carter explains.

Raising the next generation

Mike Carter actually started out at the radio station as an 8-year-old DJ spinning jazz records on the “Mike Lewis Show” (Lewis is his middle name.)

“I mean it was just fun,” Carter recalled.

“And every once in a while I’d mess up and not report it properly and say, ‘And the next song is…’ and then there was dead air. And my grandma was upstairs, and she’d be like, ‘Why is there dead air?’ ” Carter recalls with a laugh.

A few decades later, his grandparents chose him to lead the company.

This gives Carter Broadcast Group another distinction: it is one of the oldest family radio stations in the country.

By the time Mike Carter took over in 1987, both of his grandparents had moved to Florida.

Andrew Skip Carter has made his career pushing for more diverse representation and equity in the broadcast world. He knew firsthand that the path for aspiring black broadcasters was strewn with obstacles.

In addition to founding the station and the company, he and Mildred were active members of the NAACP and the National Association of Black Owned Broadcasters, a group that was formed to advocate for greater diversity in broadcast ownership. emissions. (Their grandson is now vice president of NABOB.)

Although ownership of black broadcasters has increased since the early days KPRS aired, it is even less than 2%.

Rep. American GK Butterfield of North Carolina sponsored legislation this would help restore a tax incentive to encourage greater minority ownership in the industry. However, he is still awaiting action from the House.

Mike Carter says he is proud to lead the next generation of the company and pledges to continue pushing for more diversity in the broadcast space.

And he is acutely aware of his grandparents’ heritage.

“To say that we’re the oldest black-owned radio company in America today is, you know, it’s huge,” he says.