Without the need for recurring and expensive subscriptions, real-time corrections for RTK surveys via NTRIP are now possible for free!

JTo perform an accurate RTK survey, you use a rover and a correction broadcast in real time from a nearby base. The most common sources of RTK correction are local base stations broadcasting the correction over radio (e.g. UHF), or from a remote base, using technology called NTRIP.

NTRIP (Networked Transport of RTCM via Internet Protocol) allows your survey rover to accept corrections over the Internet, removing the need for a local base station and extending your range between base and rover beyond that. that you could achieve with radio communications.

NTRIP consists of the following components: a base, a server, a caster, and a rover. Typically, the base is a stationary Continuously Operating Reference Station (CORS). The data is then sent to the NTRIP launcher, where it is transmitted back to the client’s mobile. This requires an internet data connection and, most often, a subscription with a commercial CORS network provider. Although convenient, the cost of this option can quickly add up.

NTRIP Caster: Work with your own base and rover

By using existing technologies, such as mobile internet and existing protocols, Emlid Caster makes it very easy to establish your own RTCM corrections service for any GNSS receiver that supports NTRIP.

Simply set up your own RTK base station on a known or post-processed point and configure it to send corrections to the Emlid Caster service.

If your base station is an Emlid Reach receiver, select the NTRIP option in the Emlid ReachView3 app to stream your corrections to the Caster service via the internet.

Connect up to 10 mobiles simultaneously, anywhere within a reasonable baseline (distance to your base). It just depends on your acceptable level of positional uncertainty – as with all kinematic positioning, longer baselines increase uncertainty.

You won’t have any extra expense, as there are no subscription fees – Emlid Caster is free and works worldwide.

You can connect up to five base stations to Emlid Caster, to broadcast your own corrections. This is convenient for small to medium sized organizations such as mineral exploration sites, quarries and local government areas, where reliable, repeatable and accurate measurements are needed on a regular basis with minimal budget impact. 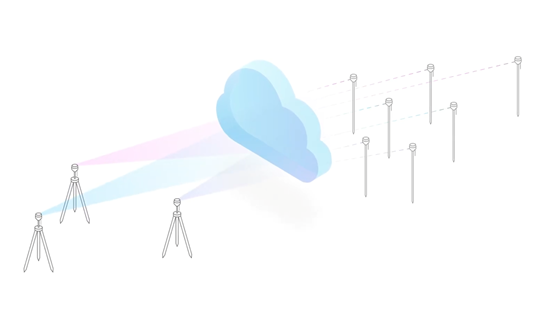 Need more rovers and base stations for bigger projects? A pro version of Emlid Caster is available. For a monthly fee starting at $199.00, you can operate up to 50 base stations and 1,000 rovers simultaneously on your own private NTRIP network. This should prepare you and your business for even the most important project operations.

For more information and to access your free subscription, go to emlid.com/au/ntrip-caster/