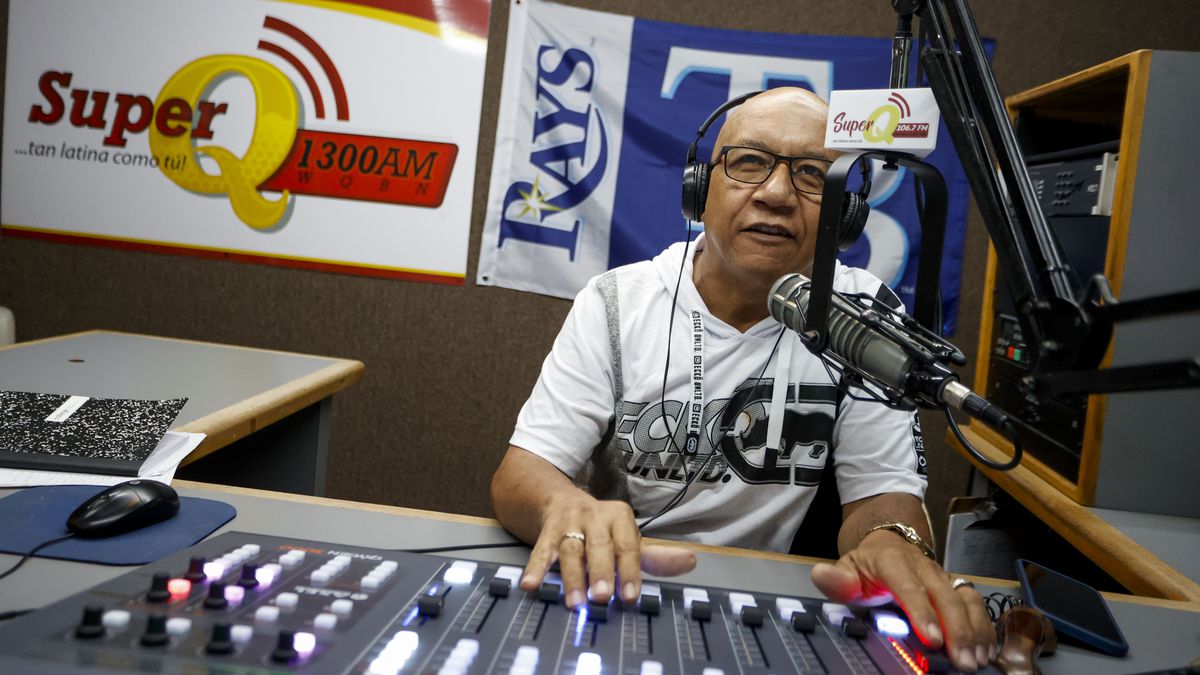 TAMPA — María Esther Flores was looking for an apartment to rent.

But instead of searching online, she called up “Flea Market en el aire”, a radio show in Spanish. She looked desperate and tired.

“I have to move and I have no options,” she said. “The person who gave me space to live needs the room.”

The friendly voice of radio host Luis Maisonet reassured her.

“We hope someone will call you soon,” he said. “You’ll be fine. Thanks for reaching out!”

While a number of new streaming radio shows use all sorts of platforms to grab their listeners’ attention, the “flea market” has stayed true to its roots. He focuses on simplicity.

The program has been a staple of the Hispanic community for 40 years, where buying and selling things, sharing music and news are part of the mix.

“There are no secret formulas,” said Maisonet, a 64-year-old Puerto Rican.

The Tampa Bay Times is highlighting the contributions of local Latinos throughout federally designated Hispanic Heritage Month, which runs from September 15 through October 15. Nearly one in five people in the United States is Hispanic. According to the 2020 census, they accounted for more than half of the population growth in the United States over the past 10 years.

Among the fastest growing metropolitan areas in Latin America is Tampa Bay, where 26% of the population is Hispanic.

“It was a program that started helping people in different ways. We are proud of this radio show,” Capdevila, 70, said.

The show grew and became popular among Latinos. It has no scripts and everything flows organically between their listeners, including the music and news that Maisonet shares in Spanish.

“We treat our people with respect and always give them a chance to participate,” Maisonet said.

We’ll bring you the latest news and information you need every morning of the week.

You are all registered!

Want more of our free weekly newsletters in your inbox? Let’s start.

Explore all your options

Alongside Maisonet is a team that includes radio coordinator and administrator Orfelina Reyna, born in the Dominican Republic; Puerto Rican radio personality Madeline Rivera; and executive director, Cristian Vallejo, who is the son of Mexican Super Q owner Norberto Vallejo.

María Alonso, 79, said she has been following the program since the 1980s. She loves its style and its connection to the community.

“When I was young it helped me a lot because I could sell and help my husband with the bills,” she said. “Now that I am older and live alone, this program is still with me. It is a blessing.

Another loyal listener, Cuban entrepreneur José Raúl Márquez, 64, said the show had a special connection with the people. Marquez likes to call to offer advice on how to spot scammers and avoid unlicensed contractors. He’s followed the show since moving from Seattle to Tampa 16 years ago.

“For me, ‘Flea Market en el aire’ is the king of programs because of his style, the respect he has earned in the community and the feeling that Luisito Maisonet gives him every day,” Márquez said, referring to the show host. . “It all matters.”

Related: After surviving a fatal accident, a Tampa Bay girl is now breathing on her own

Maisonet has been the radio host of “Flea Market en el aire” for eight years. Before that, he worked in different radio stations between his native Puerto Rico and New York State. He came to the Tampa show after other radio hosts left their personal mark and style, such as Capdevila, the late Chilean José Gustavo González, and Colombian Álvaro López Echeverri.

Maisonet brings over 50 years of experience in traditional Hispanic radio. But despite all these years and having been immersed in the profession since his adolescence, he has never directed a program as special as “Flea Market en el aire”.

“People call us not just to sell or donate things, but to ask for help,” Maisonet said. “And the best part is that there is always someone ready to lend a hand.”