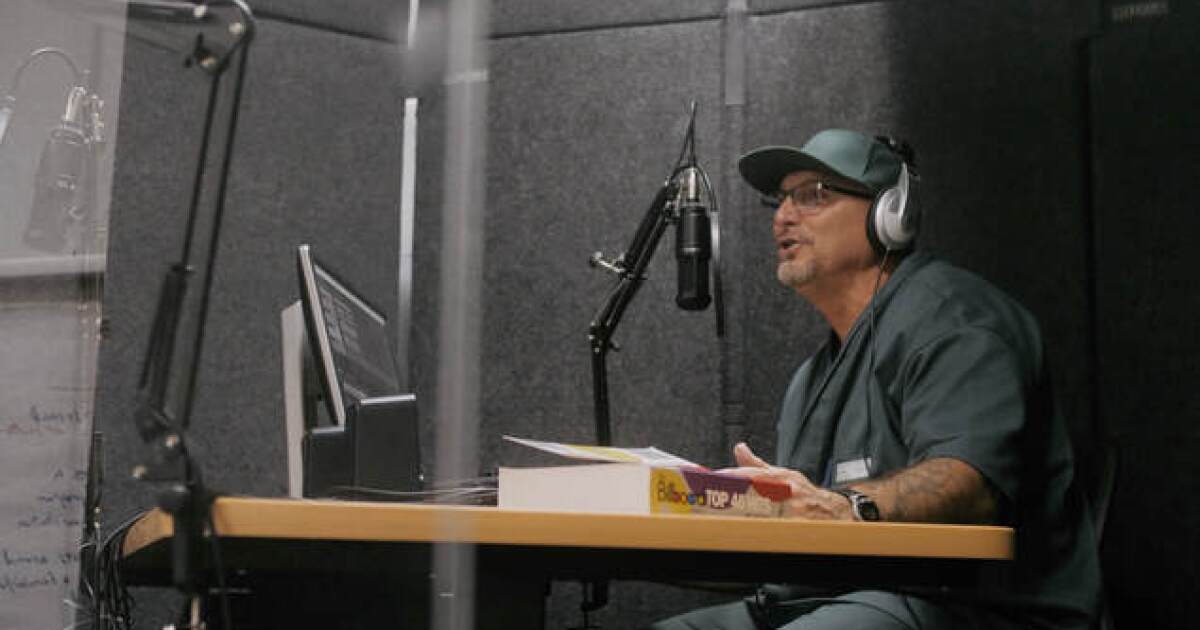 Inside the educational wing of Limon Correctional Facility, there is excitement. A group of incarcerated men huddle in a moss-covered recording studio, preparing to go on air. There are producers in green uniforms behind the microphones preparing to pre-record the launch of Inside Wire, Colorado Prison Radio. It is Colorado’s first radio station to broadcast to all correctional facilities in the state. It is also released to the public through a website.

Anthony Quintana is an engineer and chief operating officer at Inside Wire, which delivers news, music, in-depth stories and other content produced entirely by those incarcerated. He is eager to be part of a station that can be heard in cells across the state.

“The art, the different things we can do here, the creativity of the men who are incarcerated in this community, it’s so awesome to be able to do this with each other and showcase them,” Quintana said.

Inside Wire is the newest initiative of the Denver University Prison Arts Initiative, also known as DU PAI. The initiative brings creative programming like writing, theater and art to state prisons. Through DU PAI, inmates produced a statewide newspaper and podcast, and performed plays for the public and residents of other facilities.

Ryan Connaro, who works for DU PAI and is the managing director of Inside Wire, emphasizes the importance of such connections.

“I really believe that telling stories, sharing our stories, is a fundamentally human act, and it’s a need, it’s actually a basic need,” he said.

Conarro said the station was born out of the pandemic as a way to strengthen communication between incarcerated people. Inside Wire also broadcasts to the public because DU PAI wants its programs to go beyond educating those on the inside. Conarro says the goal is to build a more nuanced conversation about the criminal justice system and change how the public views those incarcerated.

Quintana agrees. He’s been at Limon long enough for his name to fade and emphasizes that focusing on the creative part of the program isn’t his only focus. He wants to change the narratives people may have about incarcerated men and women.

“My goal is to break down barriers so people see value, so society sees value,” Quintana said. “And most importantly, for our incarcerated guys to see the value in that.”

To help break down these barriers, Inside Wire produces programs like “Up To the Minute,” a weekly Q&A with Colorado Department of Corrections Director Dean Williams, and “Behind the Mic,” which features profiles of incarcerated people across the state. .

Herbert Alexander is production manager at Inside Wire. He said he got involved with the station to learn new skills. The work he and others are doing is part of a continuing education course offered by the University College of DU. Once they complete the program, they will earn certifications in audio production and storytelling.

Alexander uses his skills on the inside as he serves a 24-year sentence. But he hopes to get out soon and apply what he’s learned to a new career.

“Come and find out, if you work on yourself and achieve something, positively in such a negative environment, then you start inspiring others,” Alexander said.

The Inside Wire team also includes producers from Sterling Correctional Facility and Denver Women’s Correctional Facility. The station broadcasts 24 hours a day, 7 days a week on the Colorado Department of Corrections Closed Circuit Television Network and for the public on coloradoprisonradio.com.