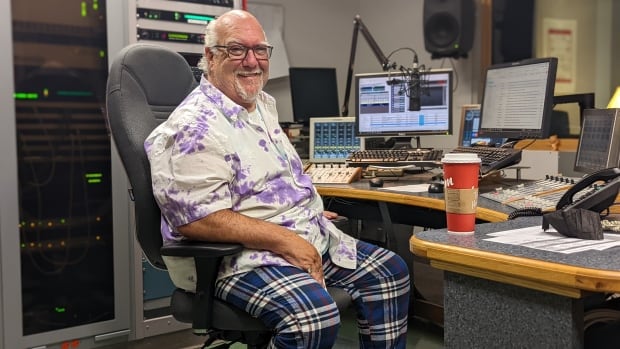 Even though Roch Fraser quits his day job, he says early mornings and busy days are still in his forecast.

The longtime director of CBC Yukon Morning is retiring after more than 20 years as a broadcaster for CBC. He said he would stay in the territory to run his Airbnb, visit friends and family, and go camping.

Fraser grew up in Alberta, but at around 14 he had already decided to live in the North after reading a book by Pierre Berton.

“I decided one day that I was going to be one of those people who had to come to the Yukon,” he said.

He went to broadcasting school in 1977. Around 1979, while working in Dawson Creek, he received a call from the program director of CKRW, a private radio station in Whitehorse, offering him a job.

“I thought, ‘This is amazing. This is a great opportunity,'” he said. “So we packed up and moved to the Yukon.”

He stayed there for three years before moving to British Columbia, but eventually returned north around 1994, working for CKRW, then finally for CBC around 2000.

He started out reading the daily news, then moved on to work on morning and weekend radio shows — on the condition, Fraser said, that he could choose the music.

He worked with Elyn Jones, host of CBC’s Yukon Morning, for the longest time — about 20 years.

One interview memory that stands out strongly at Fraser dates back more than 20 years, when he worked on the weekend show. It was in 2001, shortly after the September 11 attacks.

Fraser had been in touch with a man from New York and decided to contact him, both to check on how he was doing and to see if he would like to share his story.

“He was a very talkative guy. And he worked in lower Manhattan and where the terrorist attack took place,” Fraser said.

“When I spoke to him…I just said, ‘Peter, I can’t even imagine or try to understand what you went through last week. So if you could just tell me your story.'”

Fraser said the man spoke for about three-quarters of an hour. “I just let it go…it was the most amazing, terrifying, fascinating thing I’ve ever done, I think, on radio.”

Fraser said he will miss working with his colleagues.

“I couldn’t have asked for a better end to my career than working with a woman like Elyn…we work really well together.”

And he paid tribute to Sandi Coleman, who he also worked with for nearly two decades.

“I had such a great time working at CBC, I’m going to miss everyone,” he said. “I’ll miss being there in the morning.”

Another former colleague, former news producer Arnold Hedstrom, said “Fraser’s passion was evident every day in the many years we worked together at the CBC.”

“Good luck to you,” Hedstrom said.

Scott Regehr, a CBC sportscaster and former Yukoner who also worked alongside Fraser, described their relationship as a “pretty quick friendship.”

“Your sense of humor, your priority to the team before you – and, of course, those suave tones – are the first things that I think stand out for me,” Regehr said in parting.

Wayne Klenk, current morning show host at Bounce Radio in Trail, BC, previously worked as a weekend host at CBC Yukon and was co-host of a morning show with Fraser at CKRW in Whitehorse . He said he worked and trained under “the great Roch Shannon Fraser” in 1998 and 1999.

“Roch just had this contagious laugh that doesn’t matter how badly your day goes,” he said.

“When you hear that laugh, you can’t help but feel a little better. And there was always that genuine happiness that we had on air when we first started working together.”

Coleman joked that the team could “always count on” Fraser to let them know what season of the year it was by indicating whether he was wearing a cap or plaid trappers.

She said Fraser will be missed as a colleague.

“You so deserve this chance to step back and enjoy life away from the microphone,” she said. “And believe me when I say, it will have its own magic.”