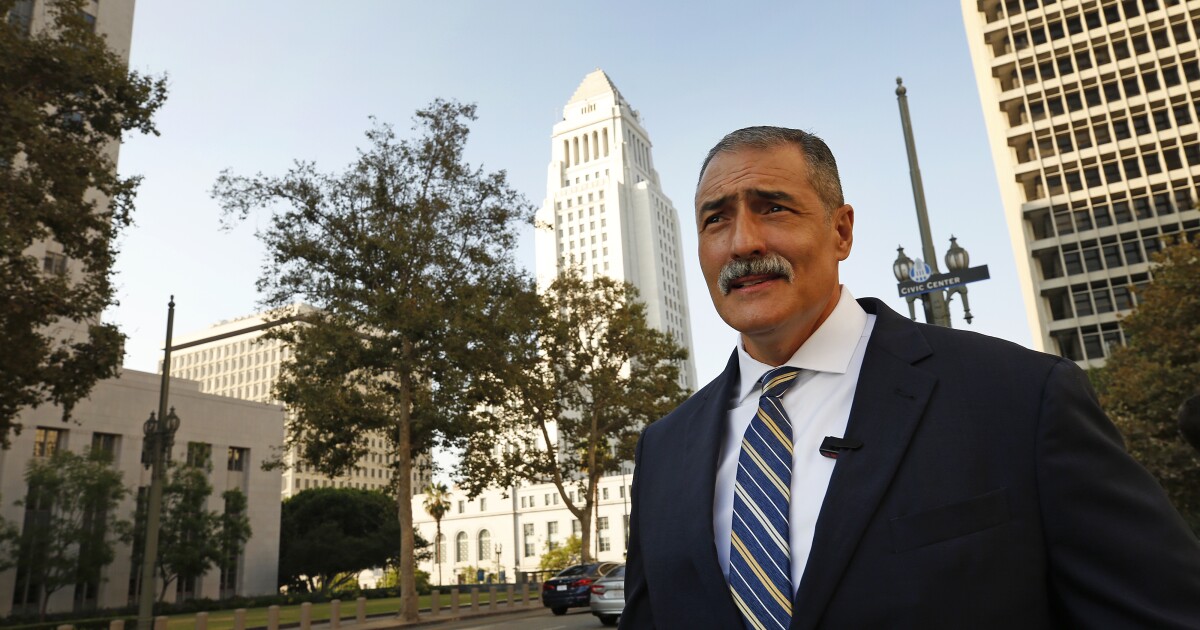 LA County Sheriff Cmdr. Eli Vera, who is retiring from the sheriff’s department this month to focus on the campaign, is seeking to have KFI remove the Sunday night segment, “Live and Unscripted with LA County Sheriff Alex Villanueva.”

“He’s using this radio show for political purposes,” Vera told The Times, adding that the show is unfair to other candidates who don’t get comparable airtime from the station. “We are less than 100 days away from the election, yet he is the only one who has these opportunities and talks about highly political things, and does not hesitate to say so.”

In a complaint to the Federal Communications Commission, Vera alleges that he requested “numerous times” that KFI interview him about his candidacy and was refused each time.

“This does not require a station to provide opposing applicants with their own programs identical to the initiating applicant,” the spokesperson said, adding that a station may choose to have an on-air personality take time off from work. concert until after. the election. “This is a business decision that is completely at the station’s discretion.”

Vera filed a second complaint with the California Fair Political Practices Commission alleging that the show amounted to an illegal KFI campaign donation to Villanueva. His complaint alleges that KFI charges more than $1,000 for a 30-second radio ad, which he says would put Villanueva’s segments well above the $3,000 limit that a person or entity can contribute. to a candidate. He filed a third complaint with the Los Angeles County Clerk.

“They don’t check his comments. There’s no counterpoint, so in that way it feels a bit like an in-kind contribution to the campaign,” Levinson said. “You could say it’s a lot more helpful than someone donating office furniture or markers for signs.”

KFI broadcast Villanueva live for two hours one evening in August last year and he has appeared regularly on the station in recent months. The subject of Sunday’s show was what KFI promoted on its website as the “deputy gangs” that operate within the sheriff’s department. For decades, the department has been dogged by allegations that groups of deputies dominate in various positions, controlling assignments, ignoring command staff and, for some, encouraging abusive behavior by deputies.

“We’re going to get into a big topic, a topic that you’ll hear about quite often in the campaign, the sheriff’s campaign, for example,” Villanueva said as he introduced the show.

Villanueva went on to criticize media coverage and independent studies of secret groups of deputies, whose members often get similar tattoos.

“We should start a Hello Kitty gang. What do you think of that?” he says on the show. He said many of the 18 groups identified in studies and news reports were active in the 1970s and their members have since retired. He pointed to the Tasmanian Devils – “yes”, he said, “it’s a Disney character”.

Villanueva throughout his tenure has played down the problem, but also took credit for solving it with a policy that prohibits MPs from joining groups that promote behavior that violates the rights of others.

He complained that people compare the groups to criminal street gangs. Last month, he sent a cease-and-desist letter to the oversight board, demanding that the board and others stop using the phrase “deputy gangs.”

The issue is at the center of the sheriff’s race, with nearly every candidate running to overthrow Villanueva arguing he hasn’t done enough to take on the rogue groups.

KFI program director Robin Bertolucci said Tuesday that KFI abides by election rules and that equal time is available on request for all candidates.

“To my knowledge, no one at KFI has heard of Eli Vera regarding an equal time request,” Bertolucci said. “Since hearing about this case, I emailed and called Eli, but got no response.”

“We have sent numerous notices and releases to all media outlets in Los Angeles discussing the sheriff’s run,” he said. “The truth is, KFI gives a candidate free airtime in the office.”

Villanueva told The Times that her campaign complied with all regulations. “It’s an act of desperation from a failed campaign, nothing more,” he said, and addressed the Times to KFI’s programming director. “Rest assured, they follow all the necessary rules and regulations.”

“He should talk to KFI about it,” Gonzalez said. “As the show has been part of the department, the campaign has nothing to do with it.”

Vera says Villanueva’s irregularity is not limited to her KFI show. Vera alleged in an interview that a deputy who works in the sheriff’s information office, which handles media inquiries for the sheriff’s department, maintains a pro-Villanueva social media account that is updated during business hours. work while the deputy is on duty.

Villanueva said he had no knowledge of “anyone who manages a social media account while serving at SIB.” He added, “As of last week, I have completed 90 town halls throughout LA County, and last time I checked, the entire county is my jurisdiction. The town hall videos are available online for the sake of transparency. Yet another futile effort from a failing candidate.