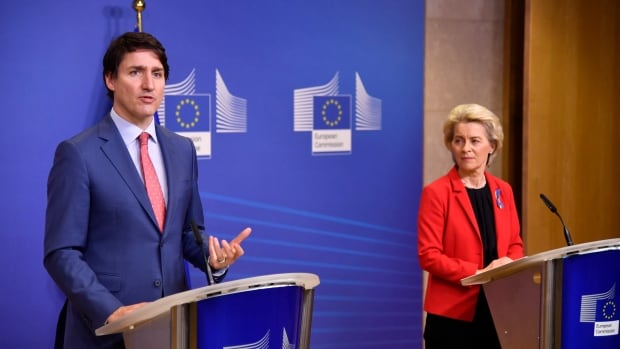 Canada and the European Commission will lead an international fundraising campaign to help people fleeing war in Ukraine.

The fundraising effort, called “Stand Up For Ukraine,” will involve politicians, artists and businesses, among others, and will culminate with a pledge event on April 9 that will be hosted by Prime Minister Justin Trudeau and European Commission President Ursula von der Leyen.

They are teaming up with international advocacy organization Global Citizen to raise funds for the humanitarian crisis sparked by the worst fighting in Europe since World War II.

A statement from Trudeau’s office says Ukrainian President Volodymyr Zelensky is inviting musicians, actors, athletes, business leaders, politicians and anyone else so inclined to participate in a large-scale gathering on social media.

The aim is to raise funds to help the millions of refugees and internally displaced Ukrainians forced to flee their homes following the Russian invasion of their country on February 24.

The UN estimates that 10 million Ukrainians have been displaced by the conflict, of whom more than 3.5 million have fled to other countries. Most of them – more than two million – are in Poland.

Canada has said it will welcome an “unlimited” number of Ukrainian refugees, allowing them to live and work in that country for up to three years. The United States said this week that it would accept 100,000 refugees.

Trudeau and von der Leyen met this week in Brussels on the prime minister’s second trip to Europe in two weeks to talk to allies about the Russian attack.