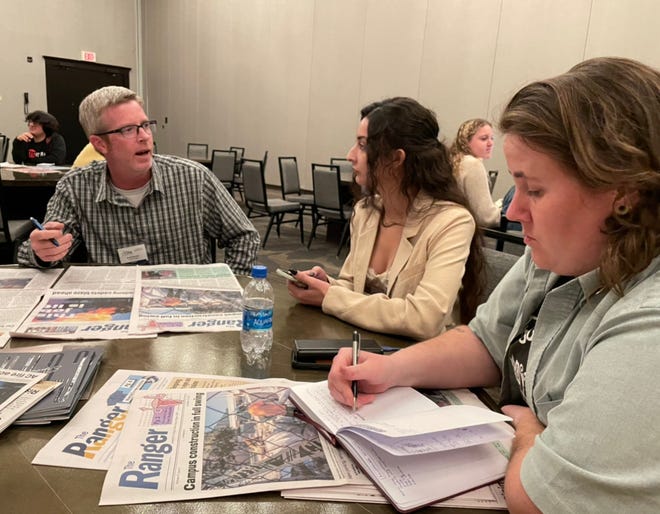 About 300 students and counselors from 35 colleges and universities across Texas spent three days competing in live competitions, attending workshops with media professionals and, for the first time ever, participating in a media fair. student job that included one-on-one reviews with working journalists. titled “Meet the Pros”.

Rylee Moore, psychology student and editor of The Ranger page, said in a press release: “Being surrounded by so many like-minded people with such different personalities was a fun way to bond and friendships.”

“We were really excited to meet in person for the first time in so long, and I think it showed how valuable this conference is for students, networking, idea sharing, in-person contests. it was rewarding and so much fun seeing everyone again after so long,” said Jill Gibson, chair of the media, arts, and communications department at Amarillo College.

Students who attended the conference included Antillon, Raygan Lopez, Rylee Moore, McCrea and Jordan Nuner. They were joined by Maddisun Fowler, student media coordinator, and Gibson, who is also vice president of TIPA.

Fowler is president of partner organization, Texas Community College Journalism Association (TCCJA). Both the TIPA and the TCCJA held annual business meetings during the convention. AC Student Media plans to attend the TCCJA event in September.

Due to the COVID-19 pandemic, this is the first TIPA convention to be held in over two years, and the first AC has attended in three years. The convention began in 1909, and aside from the two-year hiatus due to the pandemic, it has not canceled the TIPA convention since the 1940s due to World War II.

“Last year we were able to do the competition virtually, but it was not the same for us or for the students. This year it was really amazing to be able to see our colleagues in person again. There was lots of cuddling and crying, and it was fun to see the students interact with others in this area,” Fowler said.

“Whatever your career path, we believe that participating in these activities helps you grow professionally and as an individual. It opens students’ horizons to new experiences and new people. valuable part of a college education, and we are pleased to be able to provide that to our students,” said Gibson.

During the convention, TIPA honored longtime Executive Director Fred Stewart, who retired in 2020, and inducted him into the TIPA Hall of Fame. The annual Counselor of the Year award was presented to the late Kelly Lash of Rice University, following his unexpected death.

To learn more about AC Student Media and student work, visit The Ranger online at https://acranger.com/.