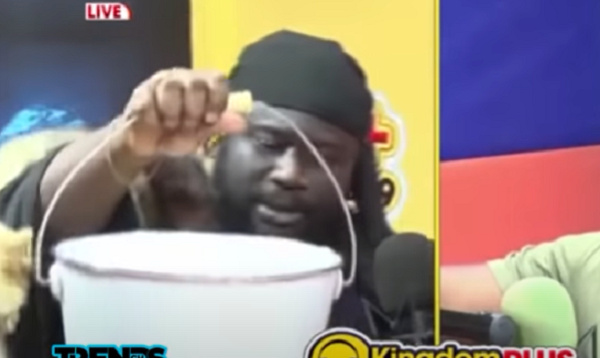 Ajagurajah reveals the right type of sponge for the bath

Ajagurajah attributes most of life’s crises to “bad bathing manners”

Just when Ghanaians thought they had seen and heard everything about Ajagurajah, the controversial man of God does another buffoonery by showing up at a radio station with two metal buckets.

The man of God, who was invited for an interview with Kingdom FM, pulled out the metal buckets, a yellow sponge and a few bottles of concoctions, to the amazement of everyone present.

The radio show’s host, Fiifi Pratt, and some people in the studio burst into laughter.

Sista Afia who was also present to promote his new song, could not help but burst out laughing.

“Ghanaians don’t know how to take a bath. Some people go to school to learn all kinds of things and it is in the same way that you also have to study the bath. People are even trained to walk so that they can be approached by men. We don’t just bathe with a sponge and soap. Even with sponges, there is a special color that we are supposed to bathe in.

Ajagurajah revealed that there is a strong tendency that individuals facing intense difficulties in life were not properly washed when they were born.

To support his claims he quoted Hezekiah 16: 4 which reads as follows:

“On the day you were born, your cord was not cut, you were not washed with water to cleanse yourself, nor rubbed with salt, nor wrapped in cloths. 5 No one looked at you with pity or had enough compassion to do any of these things for you. On the contrary, you were thrown into the open field, for on the day you were born you were despised. “

Demonstrating what he called the correct bathing process, Ajagurajah said it is always appropriate to hold the sponge in the left hand and the soap in the right.

Furthermore, he said that it was never just to dip a sponge in the water but rather to run the water over the sponge.

Watch the video below