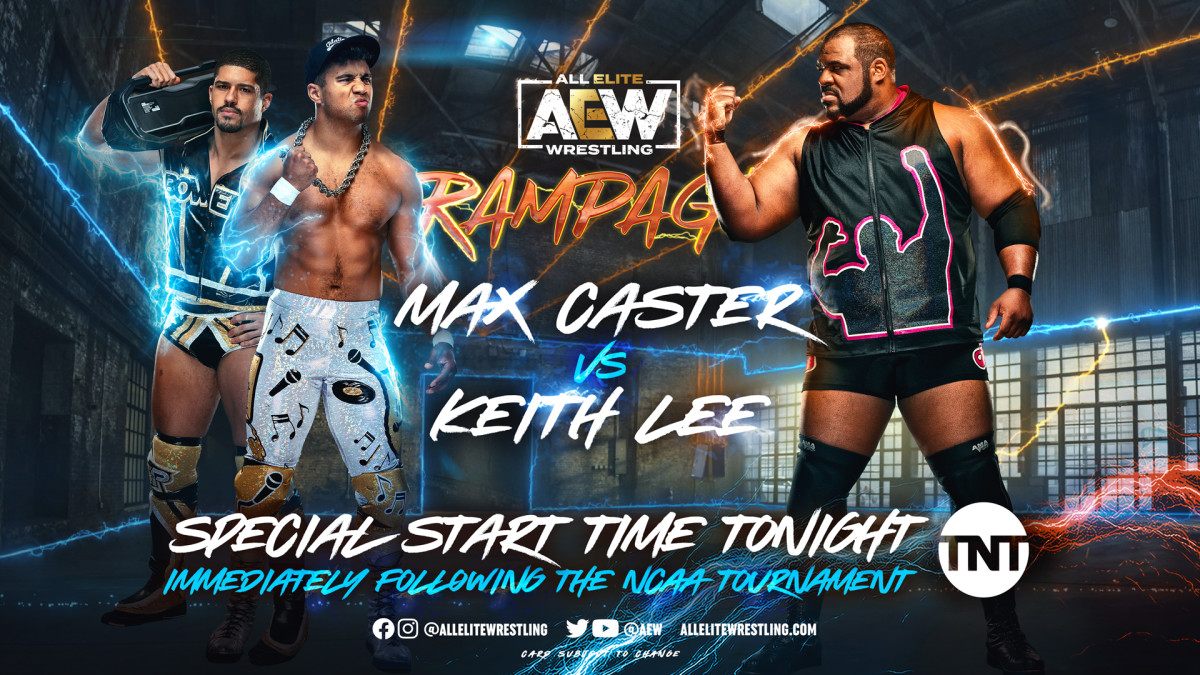 Lee will be looking to remain undefeated in singles action ahead of expected future matches against members of Team Taz.

In threes action, the House of Black (Malakai Black, Buddy Matthews and Brody King) will unite again to take on Bear Country and Fuego Del Sol while Leyla Hirsch takes on Red Velvet in a grudge match.

The show will air at 11:30 p.m. Eastern Time, or when NCAA coverage ends on TNT.

The show started at 11:48 p.m. The hosts were Taz, Excalibur, Chris Jericho and Ricky Starks.

Darby Allin (with Sting) defeated The Butcher (with The Blade & The Bunny) by countout. (10:35)

It was an updated take on the Sting/Vader matches of the ’90s, with Allin taking a beating from the Butcher and getting the occasional brief prospect spots against his biggest opponent.

Allin was kicked out of the ring early on, and The Butcher wouldn’t let him back in the ring easily. Allin managed to maneuver Butcher out of the ring, then hit Butcher with his high-speed top. Back in the ring, Butcher hit a high angle back breaker for a near pinfall. Allin came back biting Butcher’s hand. Butcher floored Allin with a clothesline for another near fall. Butcher swung Allin by the neck and threw him to the ground. On the ground, Butcher leveled Allin with a lariat. Butcher came face-to-face with Sting, and the show took a split-screen commercial break.

Coming back from the break, Allin dived off the middle rope for a dropkick, but Butcher grabbed his legs and locked himself in a Texas Cloverleaf. When it looked like Allin was going to get away, Butcher pulled Allin and pelted him while holding the Cloverleaf. Allin eventually crawled to the ropes and escaped to the ground. On the ground, Allin escaped a powerbomb attempt but was pushed back first against the ringpost. Butcher swung Allin around the ring, sending him into the barricade and the steel steps. Allin dodged a splash from Butcher against the stairs, then hit a Code Red on the floor. Allin followed that up with a Coffin Drop from the top rope to the floor. Allin crawled into the ring to beat the count, and Butcher was counted out.

After the match, Adrade El Idolo and Jose came out to distract Sting and Allin, and the Private Party ran from behind to attack. The Hardys ran to make the save (Jeff didn’t dance on his way to the ring this time). Matt Hardy challenged the AFO to return to the ring. The AFO teased getting in the ring, but of course didn’t. “Don’t give them a free game!” Save it! This is sports entertainment! Jericho said in a comment. Matt challenged Butcher & Blade & Private Party to take on The Hardy Boys, Darby Allin and Sting for Dynamite.

– Scorpio Sky cut a promo with Paige VanZant and Dan Lambert, who is now the “TNT Co-Champion”. Sky played second fiddle to VanZant. I don’t feel that Scorpio reigning yet.

The fight started on the ground, where Hirsh tried a German suplex but Velvet countered with his own suplex. When the match came to the ring, Velvet hit a standing moonsault for a near fall. Velvet showed real fire here and landed some tight body shots on Hirsh. But when Velvent went for ten punches in the corner, it felt awkward because Velvet is very tall and Hirsh is very short. Hirsh escaped and pulled Velvet down, then took control as the show went into a commercial break.

Back from the break, Velvet regained control with a bulldog cazadora for a near fall. Velvet went for a spinning kick, but Hirsh threw it from a powerbomb stance into an overhead suplex. Hirsh followed that up with a German suplex and the cross arm breaker, but Velvet used her long legs to reach the ropes. Hirsh went for a diving knee against the ropes, but Velvet ducked down and Hirsh went to the floor. On the floor, Hirsh found the screw wrench/connector she used to win matches. Before he could use the international object, Kris Statlander grabbed it from Hirsh. Distracted, Hirsh walked into a spinning kick from Velvet and got the pin.

– QT Marshall and Aaron Solo cut a backstage promo. Marshall mentions “The Boss” and since Solo is in the demo, he had no idea who Marshall was talking about. Marshall will present the first-ever “QT Marhasll Certificate of Accomplishment” to his top student, Hook, “live on Rampage” next week. (I don’t think Rampage will be live next week.)

Hope Fuego Dos isn’t upset that Del Sol is teaming up with some new friends tonight.

Bear Bronson debuted with Malakai Black. A kick out Bronson and a knee out Bear Boulder. Buddy Murphy took down Bronson and Brody King came in with a senton. Del Sol attempted a high dive and King crushed it with a right hand. Bear Boulder tried to confront the three members of the House of Black and he was destroyed. Del Sol came in with a top rope dropkick on King and actually outperformed Boulder for about 30 seconds. But, it was also destroyed. Black hit a top rope moonsault to the ground on one of the Bears, and Murphy hit a high-angle tornado slam on Del Sol for the finish. Total squash, and the crowd was very into the House of Black.

– Penta Oscuro and Alex Abrahantes cut a promo aimed at the House of Black. The Triangle of Death is inevitable.

From Caster’s rap: Keith Lee will run “like Ted Cruz in a snowstorm”. And this will be his last time on the show; fans should “remember him as the Alamo”. Caster’s fantastic rap.

As a comment, Ricky Starks might have sown the seeds for a storyline of original AEW invaders vs. AEW, when he talked about how guys like Lee and Swerve Strickland were coming in and trying to take the place of guys like Starks. and acclaimed them. Or maybe he wasn’t.

Lee dominated with power early on, but also used his speed to drop down and leap over a charging Caster (and he looked good doing that, too). Lee launched Caster with an overhead belly-to-belly suplex. Powerhouse Hobbs came out to watch the game as the show went on a split-screen break.

During the break, Caster caught Lee entering the ring with a top rope dropkick. Lee came out of a chinlock with Caster on his back, then carried Caster with a leaping bodyblock. Lee followed an avalanche into the corner with a beel across the ring. Caster came back with a superkick and tried to scoop Lee up for a firefighting carry, but it didn’t work. Lee then picked up Caster in a fireman’s carry and spun him into a Powerslam (the Big Bang disaster) to get the pinfall.

After the match, Powerhouse Hobbs and Ricky Starks ran to attack Lee, and the Acclaimed helped overwhelm him. Swerve Strickland ran with a steel chair to save Lee.

Not a bad effort for a show that was happening practically at midnight. Hopefully the eight minutes of commercials between the end of the ball game and the start of Rampage didn’t drive viewers away.